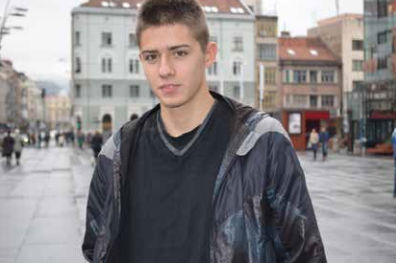 “My name is Vedad and this is my man story! I’ve been a member of Association XY for more than two years, volunteering and working as a leader and trainer in a ‘Be a man’ club. I applied because I wa...

“My name is Vedad and this is my man story!

I’ve been a member of Association XY for more than two years, volunteering and working as a leader and trainer in a ‘Be a man’ club. I applied because I wanted to find out what it was and because I heard that those who took part in Association XY activities would get a couple of days off school.

To begin with I wasn’t very interested in participating in the workshops. Mostly I was thinking about how to spend my free time after the workshops finished.

I cannot blame my friends directly, but I’m aware of the influence they had on me, the influence that we all have on each other. We thought we were macho men and I personally thought it was the right way to grow up, to be masculine.

I can’t even explain now why I have changed or how and when it happened. It’s just that, now, I see where I am, I see the right way to think about things and how to better make decisions.

If I was that old Vedad, this story would finish much faster and would be much shorter. I wouldn’t have time for you. I would be on the street, drinking beer or coffee.

Instead now I am ready to stand up as a man and to start talking with my peers about important things in the process of becoming a man. I teach and talk about what I have learned and been through, about the mistakes, facts and lessons that I have learned on my way.

My ex-friends do not know what it looks like to wake up free, without worries. They do not know how to be calm and do something useful. They do not know that I’m a real man now, a real and successful young man who gets applause and builds his brain and character with successes behind him. A real man with real standards!”

Vedad's story appears in IPPF's 'The Men & Boys Collection', a set of personal accounts of gender justice and sexual and reproductive health and rights - see right.