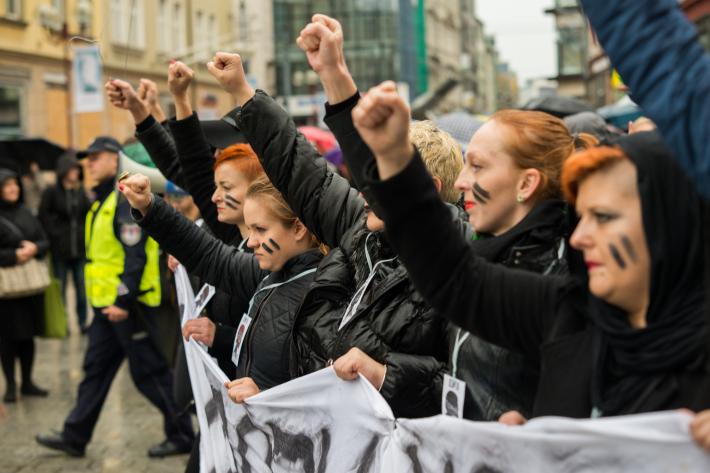 Decision of Constitutional Tribunal, marred with concerns about its independence and legitimacy, may lead to human rights violations in Poland.

Subject: Decision of Constitutional Tribunal, marred with concerns about its independence and legitimacy, may lead to human rights violations in Poland

We are writing to express our deep concerns and draw your attention to a worrying development in Poland, linked to breaches of independence of the judiciary and the protection of human rights. On 22 October, the Constitutional Tribunal will rule on constitutionality[1] of access to abortion care on the ground of “severe and irreversible foetal defect or incurable illness that threatens the foetus’ life”, as permitted under the current abortion law.[2] The removal of this provision would place women’s health and lives at risk and violate Poland’s international human rights obligations.

As rightly noted by the European Commission in its first Annual Report on the matter, “concerns over the independence and legitimacy of the Constitutional Tribunal, raised by the Commission under the Article 7(1) TEU procedure, have so far not been resolved.”[3] The Polish government’s reforms to the judiciary since 2015 have raised serious concerns regarding respect for the rule of law, and led the Commission to launch the procedure under Article 7(1) TEU in 2017, and several infringement procedures in the past years.[4] The Venice Commission has noted that changes to procedures for judicial appointments and the operations of the Constitutional Tribunal have undermined its independence and rendered its work ineffective, including due to excessive executive and legislative control of the Tribunal’s operations.[5] The request to review the constitutionality of the 1993 Family Planning Act was submitted in December 2019 by conservative MPs including from the ruling PiS party. Unresolved concerns over the independence and legitimacy of the Tribunal raise significant risks of politicization of human rights and any forthcoming decision on reproductive health and rights.

It is apparent that breaches of the rule of law in Poland, materialised in the longstanding concerns regarding Poland’s Constitutional Tribunal, could lead to further violations of other Article 2 TEU values: human rights, human dignity, equality and non-discrimination. This latest development is a clear example of how all EU values are interdependent. We call upon you as EU leaders to stand for and defend all EU values. We urge you to address breaches of the rule of law in all EU Member States, to condemn violations of human rights including women’s human rights and access to sexual and reproductive rights everywhere in the EU, and to ensure that flawed courts cannot be used to undermine the respect for human rights and EU values. In your efforts to safeguard all EU values, we call on you to make use of, and continue to further strengthen, all the legal and political tools that are or could be at your disposal, including the new Rule of Law Cycle[6], the recommendations under the Rule of Law Framework, the Article 7 proceedings and the conditionality of access to EU funds.

A decision to ban abortions in case of “severe and irreversible foetal defect or incurable illness that threatens the foetus’ life” would be a retrogressive measure. Poland already has one of the most restrictive abortion laws in the EU. Abortion is only permitted on limited grounds, including in cases of severe foetal defect. Over ninety percent of legal abortions performed in Poland are accessed on this ground.[7] Criminalizing abortion on this ground would virtually ban all legal access to abortion care in the country. It would constitute an unprecedented threat to Polish women’s human rights including the rights to life, health, dignity, and non-discrimination and may constitute cruel and inhumane treatment. In practice, women and adolescent girls may have their lives put at risk due to complications as a result of a lack of access to timely and safe abortion care, be forced to give birth against their will[8] or to undergo unsafe abortion procedures, especially those who cannot afford to travel abroad. Poland would further breach numerous provisions of human rights treaties that it undertook to respect.[9]

This latest development takes place in a broader context of repeated attempts by the ruling party to roll back human rights, including reproductive rights, women’s human rights and LGBTI rights. In July 2020, Poland announced its intention to withdraw from the Istanbul Convention, and asked the Constitutional Tribunal to examine its constitutionality.[10] Poland also repeatedly infringed on LGBTI rights, which has been denounced by the European Commission[11] and led the Commission to withhold EU funds from certain Polish cities.[12]

Considering these ongoing breaches of the rule of law and retrogressive initiatives, we call on EU institutions to respond urgently and strongly to such initiatives by Poland and any EU Member States, that would endanger the rights and lives of EU citizens and non-EU nationals living in the EU, and weaken the EU project as a whole.

[1] Firstly, it will assess compliance of the relevant provisions with Art. 30 of the Constitution (right to dignity of a person); then with Art. 38 (protection of life), Art. 31§3 (grounds for limiting freedom), Art. 32 (prohibition of discrimination), Art. 2 (social justice) and Art. 42 (criminal liability); https://trybunal.gov.pl/postepowanie-i-orzeczenia/wokanda/art/11253-planowanie-rodziny-ochrona-plodu-ludzkiego-i-warunki-dopuszczalnosci-przerywania-ciazy

[2] Act on Family Planning, the Protection of the Human Fetus, and the Conditions of Admissibility of Abortion of 1993 (1993 Family Planning Act), Article 4a § 1 pt. 2; https://www.reproductiverights.org/sites/crr.civicactions.net/files/documents/Polish%20abortion%20act--English%20translation.pdf

[4] Although notably no infringement procedures were launched in relation to the Constitutional Tribunal.

[6] The Rule of Law Mechanism should cover the full scope of Art 2 TEU values, as called for by many civil society organisations and the European Parliament: https://www.europarl.europa.eu/doceo/document/TA-9-2020-0251_EN.html

[7] According to the most recent data in 2019 in Poland there were 1100 abortions performed, 1074 of which were carried out on the grounds of foetal impairment.